Soul searching guides couple on a new path towards generosity

A decade ago, Sherrey and Jason Pridmore were living a comfortable life in Orange County, California – a $1-million home, high-end cars, the works. "We were not living generously," recalls Sherrey, who'd built a successful career in real estate.

The Pridmores, however, believed they were being coaxed down a more modest, altruistic life path. They felt a spiritual pull toward a life of generosity rather than living extravagantly. So when Sherrey experienced complications that threatened the couple's plans to have children, they knew that God had bigger and better plans for their lives. Rather than devote their emotional and financial resources to in vitro fertilization, the couple felt God calling them to provide a home to a child in need.

"We wanted to be parents," Sherrey says. "And there were so many kids who wanted parents." In 2012 the Pridmores started the adoption process.

In December of that year, the Pridmores made a trip to the Philippines, where Jason, a youth and family pastor, had spent his high school years. The couple dined with two friends who run a nonprofit ministry, based in Manila. This ministry supports poor and marginalized children in the Philippines and parts of Africa.

Also at the dinner party that night was a trio of siblings – Jade, the oldest, and Bobby and April, whose ages at the time ranged from 11 to seven.

The children's parents had died seven years earlier. Before the orphans were placed in a group home, they were living unsupervised in a 10-by-10-foot shack, fighting starvation and a variety of diseases.

Before the end of that dinner, Sherrey says, "It became evident that these were supposed to be our kids."

The decision to adopt was easy. The adoption process, however, was fraught with unexpected setbacks, frustrating redundancies and surprising costs. Adopting the children took nearly three years and cost upwards of $75,000.00.

Shortly after Jade, Bobby and April joined the Pridmore family, the newly expanded clan relocated to Jensen Beach, Florida. Jason took a position at a church in Port Saint Lucie. "We were starting all over together," says Sherrey, who continues to work in real estate – now writing mortgages from her home office.

The Pridmores have been furiously active in their community and devoted to helping support others. Over the past few years, Sherrey and Jason organized five Thrivent Action Teams. One project raised $2,500 to provide Christmas for three families. Another team event enabled the remodeling of the youth room at the Pridmore's church. They also participated in a project for hurricane relief and clean up in the Florida Keys.

"Thrivent Action Teams bring families together and unite people," says Sherrey. "I can't tell you what a difference it's made in our community."

Want to help unite people in your community?

All Thrivent members are eligible to lead a Thrivent Action Team. Apply to lead a team today.

Not a member? Learn more about Thrivent and what makes us different. 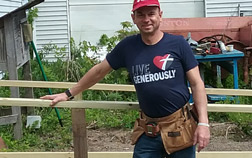 Hope for the homebound 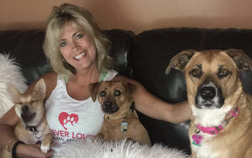 A passion for paws 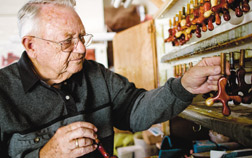