Giving Back – with Heart

Given a second chance at life, Jack Eicher shares his blessings – and his story

John "Jack" Eicher used to have a chronic heart condition, yet today he calls himself "blessed." The Concord, North Carolina, resident is a man of few words, but he wants to share his story – with the hope that it will help others.

Eicher contracted rheumatic fever when he was in college. It damaged his heart, but multiple aorta valve replacements allowed him to lead a fairly normal life – until 2007. He needed a transplant.

A heart became available within a few weeks. "Of course I was happy that I was going to extend my life," he says. "But I had mixed feelings, because I knew somebody had to lose their life for me to get a heart."

"When I met her mother, she wanted to hug me to be close to her daughter’s heart."

Years later, Eicher and his wife, Carol, met the donor's parents. Reliving that day brings tears to their eyes. "My donor was a young woman who was killed in a car accident," Eicher says. "When I met her mother, she wanted to hug me to be close to her daughter’s heart."

Since the transplant, the Eichers have become strong supporters of LifeShare, an organization that provides organ and tissue transplant services. And Eicher regularly shares his experience to inspire others to register as donors. "I tell people to put themselves in the place of someone who needs an organ transplant," he says. "How would you feel?"

But this story of hope doesn't end there. After his surgery, Eicher vowed to put his "new heart and soul" into helping others. That mindset is one reason he and Carol became Thrivent members. "When we saw what Thrivent does with Habitat for Humanity, we had a good feeling about it," says Jack. "We wanted to be part of an organization where we could give back."

Since then, the Eichers have been contributing to their community in many ways. Jack regularly volunteers with Thrivent Builds Repairs. Much of his work has been on older homes with deteriorating decks and porches. "People were in danger of hurting themselves going in and out of their houses," he says. "They were grateful for our help because it was a safety hazard, and they couldn't do the work themselves."

Eicher counsels others to not be afraid of getting involved. "There's always something you can do to help," he says. "Look for an organization where the people have similar interests, and just get in there and try it."

It's easy to get involved!

Want to "just get in there and try it" yourself? Find out more about Thrivent Builds and Thrivent Action Teams. 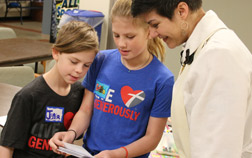 Developing a habit of gratitude 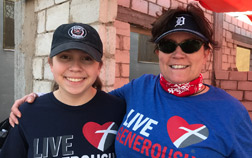 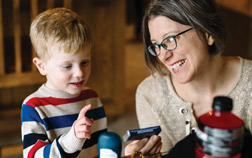