Does your volunteer time really pay off?

Yes – thanks to a little help from kids, pets & movies

Between work and home, family and community commitments, your days are full.

Yet many people make time to give back. In fact, more than 62 million Americans volunteered in 2015, according to VolunteeringinAmerica.gov.

Here’s how three Thrivent members are working to do good in the world – and receiving as they give.

When Lisa Sharot's husband, Rob, told her that he felt called to take over the youth group at their church, "I told him, 'Good luck with that,'" Lisa says.

Their daughters were entering sixth grade, and she thought the project would be time-consuming and frustrating. After the Sharots, of Fort Pierce, Florida, began working with the St. Andrew Lutheran Church youth group, however, "It did not take me long to fall in love with those kids," Lisa says.

The couple let the youth group become a part of their lives, even though they work full time and Rob owns two businesses.

The Sharots relate Bible stories, such as the tale of David and Goliath, to issues faced by today's teenagers, including bullying or drug addiction.

They found ways to mix it up – a mission trip might end with a day of whitewater rafting. They took late-night phone calls from teenagers. One girl told them that her involvement with the youth group helped persuade her not to commit suicide.

"It increased our faith. It kept us young," Lisa says. "It's humbling to watch God move through us and through the rest of the group."

"The people I've worked with over the years have been so committed to what they do. It inspires me to keep going."

Pat Nielsen of Gretna, Louisiana, is a self-described cat person.

So when she saw a newspaper ad recruiting volunteers for the Louisiana Society for the Prevention of Cruelty to Animals (SPCA), she didn't think twice. That was 27 years ago.

Nielsen's first SPCA job was cleaning puppy and kitten cages. She still makes the rounds to see if any cute cats are available, but after adopting three within the first month, she now spends her time publicizing fundraisers and tracking donations.

"My philosophy from the very beginning was that I cannot save every animal in the world," she says. "I do the best I can. The people I've worked with over the years have been so committed to what they do. It inspires me to keep going." And keep going Nielsen does, spending 10 to 14 hours a week at the SPCA.

Ever since Kelly Smith and her husband, Ryan, got married 12 years ago, they wanted to share their love of old movies with others.

Two years ago, Kelly proposed showing the movies to residents of an independent living facility down the street from the couple's Jefferson City, Missouri, home. Those movies, which often feature Cary Grant and Jimmy Stewart, now are shown one Saturday every month.

"A lot of people living in facilities are lonely," Kelly says. "We wanted to remind them of when they were younger. A lot of them will say, 'I saw this in the movie theater with my husband.' It's a warm, nostalgic memory."

The project was a good fit for Kelly and Ryan. They had spent part of their honeymoon at the Jimmy Stewart Museum in Indiana, Pennsylvania. They also wanted to teach their two sons about the value of service.

"It's a special time because we're all together," Kelly says.

Make your volunteer time pay off

Want to volunteer your time but don't know where to begin? Consider leading a Thrivent Action Team. Thrivent members, and your family and friends, can give back to your community through a fundraiser or service activity.

Not a member? Learn more about Thrivent and what makes us different. 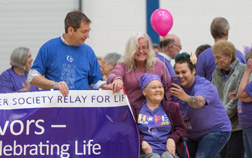 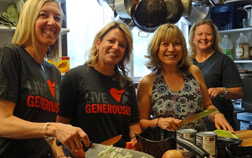 A spark of generosity 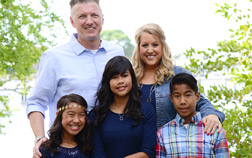