Three Thrivent communities show generosity, gratitude and resilience in the aftermath of hurricanes

A refrigerator stands in the middle of a house that's no longer there. Rusted vehicles lay overturned. Dumpsters are filled with yesterday's treasures. All are tragic reminders of last year's natural disasters – devastating hurricanes, massive flooding, violent tornadoes and wildfires.

Many Thrivent members suffered great loss from the disasters. Many experienced the generosity of others. Many gave of themselves in return. In 2017, Thrivent members and friends donated $11.7 million and 136,248 volunteer hours, but our efforts didn't end there. To demonstrate our continued commitment to the cause, our members gave almost $30,000 in 2018, which will be matched dollar for dollar by Thrivent. We celebrate and thank all who participated.

Even with this outpouring of generosity, your help is still needed. Much of the funding went to immediate recovery. We are committed to long-term rebuilding and we know many of you are as well.Read more...

The disaster relief organizations listed below are actively working to support long-term hurricane recovery. To make a personal donation, select one of these organizations. Thrivent will pay the processing fees, so 100% of your donation goes to help people in need.1 Eligible members can also direct Choice Dollars®.

Thrivent is partnering with Habitat for Humanity to send volunteer teams to hurricane-impacted areas in Florida and Texas. Habitat for Humanity of Highlands County in Florida will build 10 new homes for disaster-affected families each year for the next four years. Teams are scheduled to help with rebuilding efforts in 2018 – and we need your help.

Learn how to become a team leader and view our catalog of destinations.

In the days and months following the hurricanes, our partner organizations deployed disaster teams to respond to urgent needs. They distributed emergency supplies including food, water and hygiene kits. They sent volunteer teams to remove debris, provide daily meals and help with clean-up efforts.

Because of your generosity, they were able to provide disaster relief services to the hardest hit areas. However, what you see here is just a portion of the work our partners have done throughout the past 12 months.

Angels in the aftermath: Andee's story

Thrivent member Andee Casarez recalls the day she and her family were forced to evacuate their home in Katy, Texas, after Hurricane Harvey hit.

"I couldn't believe this was happening to us until we left our home in waist-high water," says Andee. "When we were allowed to return two weeks later, our neighborhood looked like a war zone. There was glass all over. And concrete fences were knocked out from the pressure of the water created by motor boats that were rescuing people and animals from their homes."

"As soon as we had to leave our house, people began to take us under their wings." – Andee Casarez

Yet in the aftermath of the hurricane, she was overcome not by a sense of shock or fear, but of gratitude. "As soon as we had to leave our home, people began to take us under their wings," Andee says.

Her brother-in-law located a boat to get the family to safety. A past coworker found an apartment for the family to rent until their home was repaired. A friend in Nebraska applied to lead a Thrivent Action Team and organized a fundraiser.

"I know that it was God's way of saying, 'I've got you,'" says Andee. "I don't remember feeling scared. People lifted us up, so we never felt helpless." 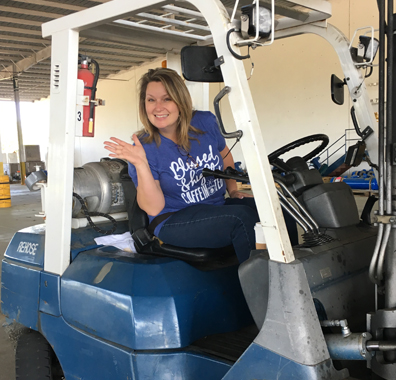 Laurie Holleway volunteers her time to assist with disaster recovery efforts in the Houston area.

From survivor to volunteer: Laurie's story

After surviving Hurricane Harvey, Laurie Holleway told her husband, "the Lord is calling me, but I don't know what he wants me to do."

She found her answer during a Sunday worship service at Salem Lutheran Church. The church had acquired a large warehouse, where volunteers could accept donations and then distribute the items to hurricane victims. When the pastor asked if anyone could operate a forklift, Laurie looked at her husband. He smiled and whispered, "There’s your calling."

"I told God, 'I'll volunteer until you show me what's next'," Laurie says.

Today, Salem Lutheran continues to partner with Trinity Klein Lutheran Church to assist with disaster recovery efforts. And Laurie (who worked her way up from forklift operator to distribution manager) continues to follow her calling.

“We're going to be doing this for a long time," says Laurie. "And we're always seeking volunteers to help."

The damage caused by the 2017 hurricane season was so catastrophic and widespread that the recovery is projected to take five to seven years.

As of July 2018, more than 100 households in the Middle Keys were still living in FEMA temporary trailers.2 Nearly 135,000 homes in the Houston area were damaged or destroyed by Hurricane Harvey. And in Puerto Rico, an island of nearly 3.4 million people, power was fully restored nearly 11 months after Irma swept through. 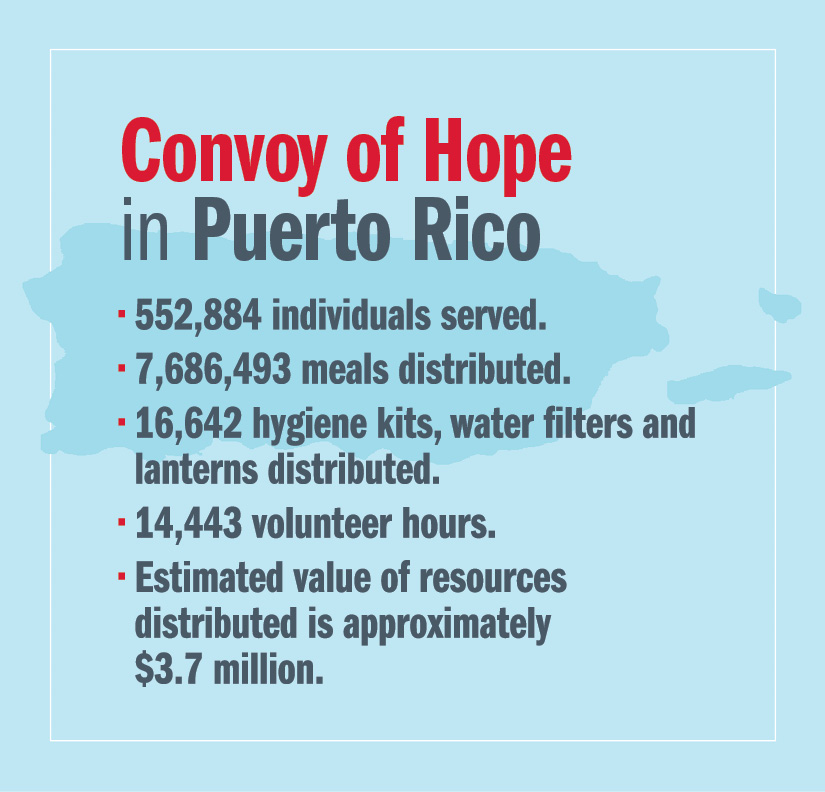 Caleb Campbell, pastor of Desert Springs Bible Church in Arizona, recently returned from Texas after volunteering with members of his congregation. "Most of us were shocked at the devastation and need that is still there," he said. "Especially since it is no longer in heavy news coverage."

"Most of us were shocked at the devastation and need that is still there." – Pastor Caleb Campbell

Tim Birdwell, pastor of Phoenix Bible Church, also led a volunteer team to the Houston area where they met resilient and grateful people. "The woman we served thanked us 100 times and fed us every time we came," Tim recalls. "She was in tears when we left about why we would give our time and travel to bless someone we didn’t even know."

Like so many volunteers, connecting with real people experiencing adversity, and seeing the extent of the destruction up close, left an imprint that is hard to forget. “It was amazing to see the devastation seven months post-hurricane," Tim says. "People still need help so badly."

Our continued prayers go out to the families affected by last year’s natural disasters and to the thousands of volunteers who continue to assist them. 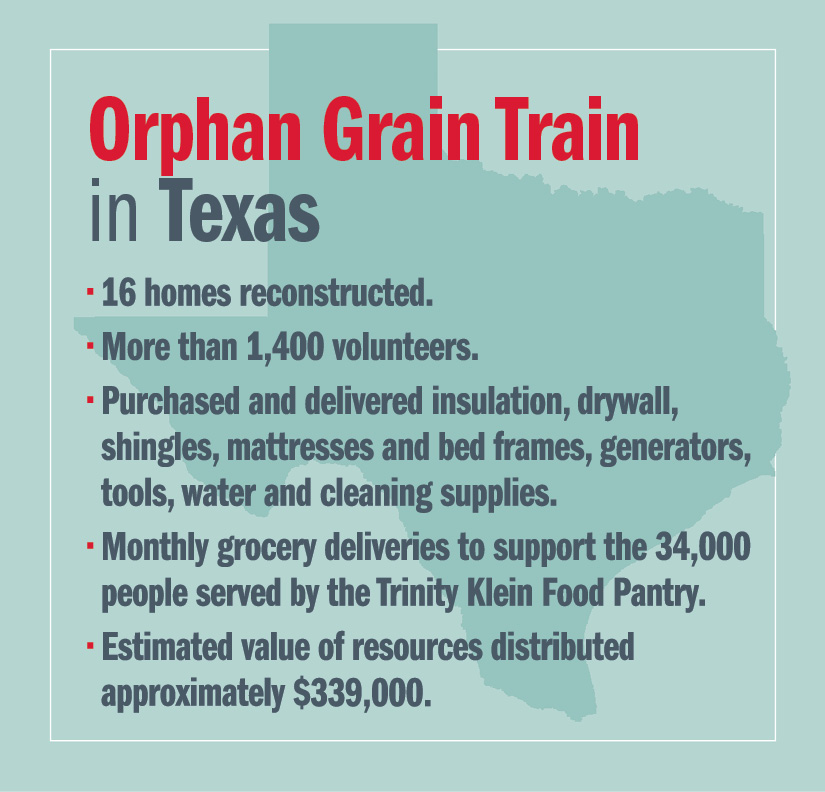 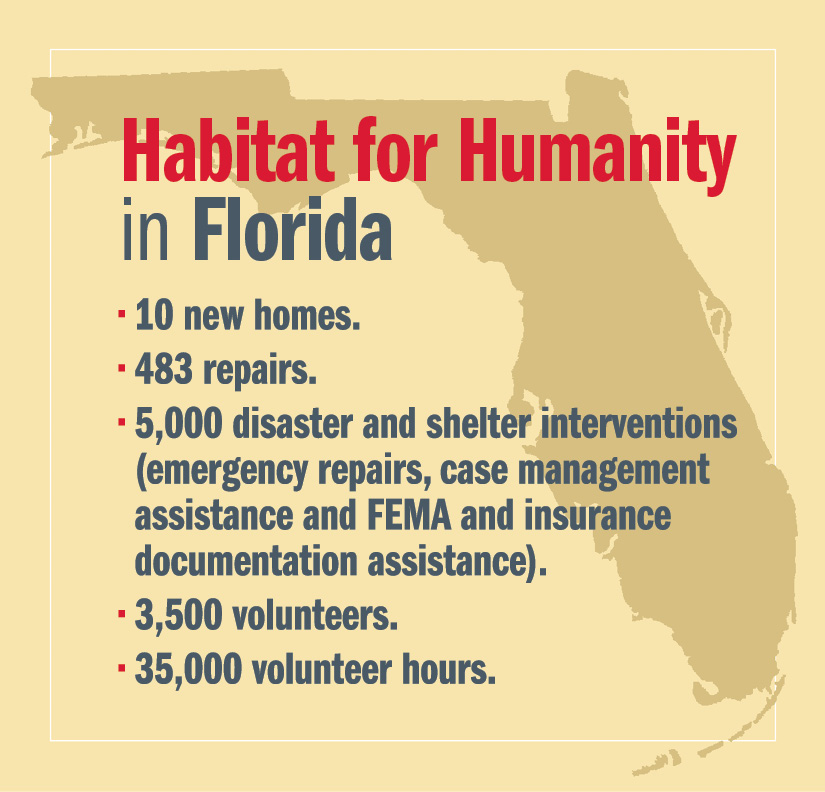 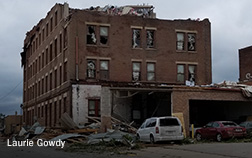 Support Iowa communities on the road to recovery

Tornadoes swept through central Iowa on Thursday, July 19, 2018, destroying 89 homes, damaging more than 1,000 homes and businesses, and injuring 17 people. Called a "humanitarian disaster" by the American Red Cross, the tornadoes caused massive destruction in the communities of Marshalltown, Pella and Bondurant.

1 Thrivent will pay the processing fees for personal donations made through InFaith Community Foundation, up to $100,000 or by Dec. 31, 2018, whichever comes first