Man on a mission

Travis Rose remembers when churches were the center of the community.

"We shared news, we shared what was going on in our town," says Rose, a Thrivent Financial representative in Antigo, Wisconsin, a city of about 8,000 people about an hour northwest of Green Bay. What's more, churches' approach to community connection used to be pretty simple. "We'd open our doors, people would come in, and we'd do what we were supposed to do."

These days, churches often need new types of community outreach. "The question is: How do we set churches in the public eye and reach to serve our community in a way God has told us to do? " Rose notes. "The answer is by serving those in need."

For Rose, that service emerged in the form of a Thrivent Builds collaboration with Habitat for Humanity, the nonprofit that builds safe and affordable shelter alongside people from around the world. In mid-2015, Rose got in touch with Kellen Lewis, pastor of the Antigo Community Church, a local Evangelical Free church. Lewis suggested banding together with other churches, including Rose's Pentecostal church. Within a few months, five churches came together to support what came to be known as Mission Antigo.

After a year of planning, Mission Antigo started on Saturday, June 11, 2016, with nearly 90 volunteers (many of whom were Thrivent members) on hand. They worked for an entire week on such tasks as yard cleanup and debris removal.

But as Rose adds, they also took on more complicated work. Case in point: A local house owned by an older disabled couple was in poor shape, with its soffits rotting and falling off. "We replaced all the soffits, all the fascia, painted the entire exterior of their house, and replaced their windows as well," he says.

Another local family had recently bought a house with a debris-filled yard. "We took out railroad ties and other dangerous things," Rose recalls. "Then we brought in a couple of dump truck loads of topsoil, leveled the yard, and got everything graded away from the house."

During the week, a massive rainstorm flooded the house's basement. No problem: Nearly two-dozen Mission Antigo volunteers cleaned it out in a few hours.

"How do we set churches in the public eye and reach to serve our community in a way God has told us to do? The answer is by serving those in need."

In addition to these larger projects, volunteers also performed what Rose describes as "rock the block" work. Team members would pick a block, knock on doors, and ask residents whether they needed cleanup work done in their yards – pruning trees, trimming bushes, removing leaves and the like. In addition, volunteers planted 120 trees in 80 different household locations.

In short, a very busy week. But it was such a success that the churches will do it again. Mission Antigo 2017 volunteers will work on smaller projects such as wheelchair ramps and yard cleanup.

According to Rose, Mission Antigo "energized the churches." He also notes that when residents saw how their neighbors' houses and yards were being fixed up, "it inspired them to take action on their own properties as well."

Build up your local community

Join Thrivent members and other volunteers as they work alongside homeowners in need to help make exterior improvements on their homes. To get involved in a Thrivent Builds Repairs project in your community, reach out to a local Thrivent Financial representative. 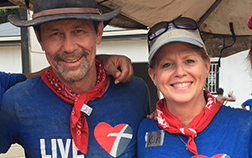 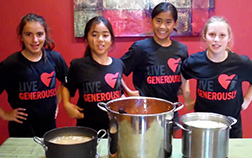 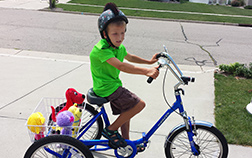 Rallying for a family in need