LaRae Plessing first caught the homebuilding bug from her pastor. “He mentioned that Habitat for Humanity was looking for people to help with construction of a house, and invited church members to lend a hand on a certain day. I thought it sounded like fun, so I showed up,” she says.

That was 12 years, many ladders and 15 houses ago.

The 78-year-old retired farmer has been a core crew member on Fremont, Nebraska-area, Habitat work sites ever since. You’ll find her wearing a hard hat and tool belt, with a nail gun or air hammer in hand, every Thursday, Friday and Saturday yearlong – weather permitting.

LaRae gets satisfaction knowing she’s helping people achieve their dream of homeownership. “I love working with the future homeowners. They’re so tickled to be moving into something new that’s theirs. And by putting in sweat equity, they’re learning new skills, too.”

“I love working with the future homeowners. They’re so tickled to be moving into something new that’s theirs.” – Thrivent member LaRae Plessing

Last summer, a single mom homeowner-to-be was on-site helping the volunteer crew shingle her roof. “I remember her saying, ‘I never thought I’d be on a roof tethered by ropes and a safety harness!’” LaRae recalls.

That’s a feeling LaRae knows well. Over the years, she’s done a lot of things she never expected to do – picking up new skills and building new relationships along the way.

“When I first started volunteering with Habitat, volunteers worked with hammers and nails. As our building skills and comfort level grew, we eventually graduated to power tools. They make the homebuilding process faster and easier,” LaRae says.

When it comes to the scope of work, LaRae has done finishing, woodwork, tile and drywall, and that’s just the beginning. “I used to lay concrete, stack stone and go up on the roof. But siding has become my specialty, and now I’m in charge of it,” she says.

This comes as no surprise to anyone who’s ever been on a build with LaRae, including her Thrivent Financial representative, Chris Leaver, who also serves on the board of the Fremont Habitat affiliate. “It’s awesome to work with her!”

This year, LaRae and other Fremont-area Habitat volunteers will complete three homes. They’re currently finishing up the interiors of two houses. The third will depend on when Mother Nature declares spring has arrived, so framing of the house can resume.

As you’ve likely guessed by now, LaRae has a hard time being idle. “I have to keep busy. A lot of people volunteer at hospitals, but I’m not the hospital type,” she says. “I like doing physical work. I farmed alongside my husband for 47 years. I enjoy doing what was once considered man’s work.”

LaRae’s generous spirit doesn’t slow down once she gets home. A member of her church’s lay ministry, she spends her evenings and downtime (what little there is!) crocheting prayer shawls for nursing home residents.

But it’s the homebuilding that keeps her grounded – even though she’s often on a ladder. “When I first started out volunteering with Habitat for Humanity, there were 10 to 15 regulars – many of them were Hormel retirees,” she recalls. “One of them kept going until just recently, when he turned 92. Now at 78, I’m the oldest one!”

And she doesn’t plan on slowing down anytime soon.

You can help build or repair homes locally or abroad through the Thrivent Builds program. Find a local build or join a domestic or worldwide trip. 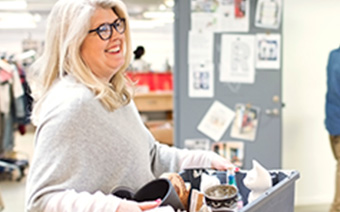 Resolve to be generous 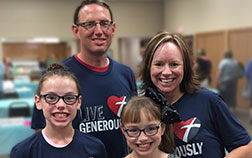 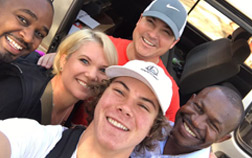